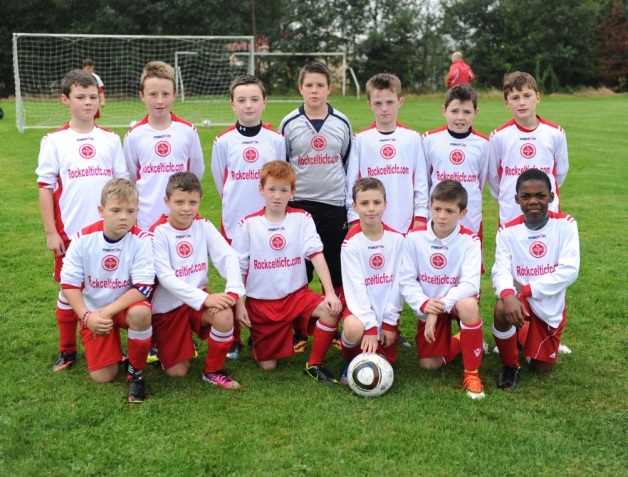 Rock Celtic U10’s had to come from behind at Sandylane in midweek to continue their unbeaten run against a strong Muirhevnamor side. The league leaders went a goal down after only 10 minutes in the first half following some good work down the middle from Muirhevnamor and a great strike which gave Rocks goalie Niall Brennan no chance. Rock struggled to get into the game after that and the first half scoreline finished up 0-1. The Second half started with a sense of urgency from the Rock and it wasn’t long before the pressure paid off with some good work from Even McEnteggert on the right wing. His pass to Mark Leavy was perfectly weighted and Leavy’s goal levelled the scoreline. Rock continued their pressure and some strong play was finished off with a good goal from Sebastian McGeogh. The home side defended well in the closing few minutes with Joseph Laverty, Darragh O Gradaigh and Adam Donoghue all playing well at the back. The matched finished 2-1 to edge the team closer to the U10 Premier league title.

Rock Celtic now need just one win from their four remaining league games to secure the U11 Premier League after a hard fought 3 points against an ever improving Muirhevnamore side at Sandylane in midweek. Both teams battled hard during the first half with very few clear cut chances for either side. Rock’s Josh Hanna hit a number of powerful shots from distance and looked the most likely to score. Rock stepped up a gear in the second half and started the pass the ball around creating a number of good goal scoring opportunities which were not taken. Midway through the second half, and with the game still evenly balanced, Dara Quinn set the ball back to Josh Hanna just outside the 18 yard box. Josh’s first touch gave him the space he needed and he buried the ball into the bottom corner giving the keeper no chance. It was an important goal and the home side held out for another well deserved win. The team’s next game is on Saturday away to Rangers in Bellew Park.