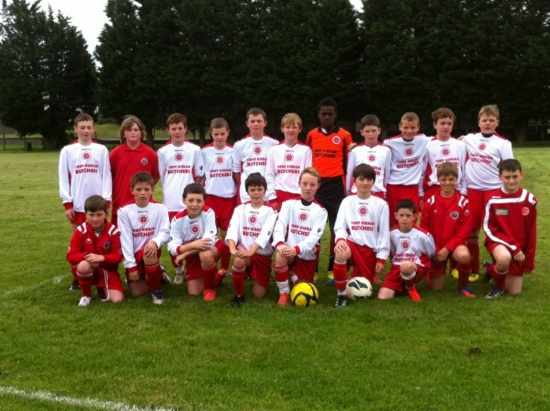 This was a classic encounter between 2nd and 3rd in Division 1. Both teams started brightly with chances at both ends but both keepers including Rock’s Ben Mooney were in flying form. But it was Dromin who drew first blood after 30 minutes with a well executed corner kick which was flew in off a Dromin forward.  Rock pressed back through clever play from Conor Boyle and Craig Bannon and struck the Dromin post but could not get a way past their defence.  The score stayed at 1-0 until early into the 2nd half and after sustained Rock pressure, Conor Boyle, assisted by the hardworking Malachy Quinn and Caoilan O’Sullivan, buried the ball into the Dromin net from close range.  Rock continued to press and after super work from Stephen Gallagher to Andy Lynch who played in O’Sullivan who then produced one of his specials which put Rock 2-1 ahead.  Despite Dromin attacking back, Rock seized the advantage and went 3-1 up with a delightful chip from Alex Hanneffy. A ding dong match ensued with both teams going for it and Dromin scoring from close range to make it 3-2.  Rock went back up the pitch and with 5 minutes remaining , an expert pass from the impressive Alan Smith put Killian Dempsey through, who rounded the keeper and  struck superbly  to make it 4-2. Not to be outdone, Dromin scored a late late goal to ensure a nail biting last few minutes but ,with Feidhlim Joyce and Niall Campbell excelling in defence, Blackrock held out for a deserved victory.

Rock kept up their title challenge with a fantastic win over arch rivals Quay Celtic by 3 goals to nil. Playing against a slight breeze in the first half, Rock took the fight to quay from the off forcing a number of corners and creating a few chances from distance. Although Quay had a fair amount of the ball in the early stages they failed to create any chances of note, as the Rock defence of Conor Soraghon , Mark Hanna, Odhran Duffy and Liam McDonnell were outstanding all day long not giving a stiff to any of Quay’s attacking men. The breakthrough came for Rock after 20 mins when Kerry outmuscled the Quay defence and coolly finished passed the Quay keeper to give Rock the lead. The goal really settled the home side down and from there on they stamped their authority all over the pitch. The ever improving Daniel Corcoran and Aidan Curtin were now dominating centre field while the brilliant Oisin Meegan and Oisin Murtagh were destroying the two Quay fullbacks .The second half was more of the same with Rock creating a host of chances but just couldn’t find the important second goal with Liam O’ Callaghan , Oisin Meegan ,Oisin Murtagh and Daniel Corcoran all missing chances. The second goal finally game when Liam O’ Callaghan volleyed into the net from 6 yards after good work again from Oisin Meegan. Rock introduced some subs but such is the strength of this squad it didn’t change the flow of the game with Jonathan Kieran , Alex McCarthy, Conor Neary, Niall Smyth, Jack Barron and Eoghan O Hora all playing their part. Although Flyn Kieran hadn’t a lot to do in goals he looks a very good keeper in the making with his handling and distribution of the ball to set up attacks. The third and final goal of the game came after a succession of Rock attacks when Liam O’ Callaghan squeezed the ball home from an acute angle to give rock a deserved 3-0 win. It would be unfair to single out any individuals as this really was a great team performance with not one player having a below par game. The match was kindly sponsored by The Murtagh family.

The Rock eventually got a win over this Quay Celtic team which they failed to do in the last 7 years! However this barron run finally came to an end on a very cold Bank Holiday Monday, with the Seasiders securing a one nil victory over Quay. The Rock lads put in a very good performance from start to finish, which has been the missing ingredient at times this season. While the score was only one nil the Rock had many chances to inflict a even bigger win and the team can be satisfied that Quay were restricted only to long range shots.

The Rock started off very well keeping possession and then going on the counter attack when the opportunity presented itself. However they could not convert the final ball into the net. This pattern continued for 15 minutes then a lot of play was around the midfield area were a new partnership of Jack Reid and Feidhelm Joyce were a good match for their Quay counterparts. Also very impressive was the new defensive partnership of Ben Mooney and Alex Hanneffey who dealt with nearly every ball that came their way. Rock then got the breakthrough after the restart when Ross Kelly was fouled 35 yards out from the Quay goal after turning his defender. Up stepped Aidan Curtin who let a rasper of a shot fly into the Quay net, this was certainly a great goal. Instead of defending their lead the Rock lads kept pushing forward until the referee blew the final whistle to an elated rock team (and supporters). In all this was a great all round team performance from defence, midfield and Ross Kelly up front who held the ball up very well. But a special mention has to go to young Aidan Curtin who was outstanding in both his defensive and attacking duties.