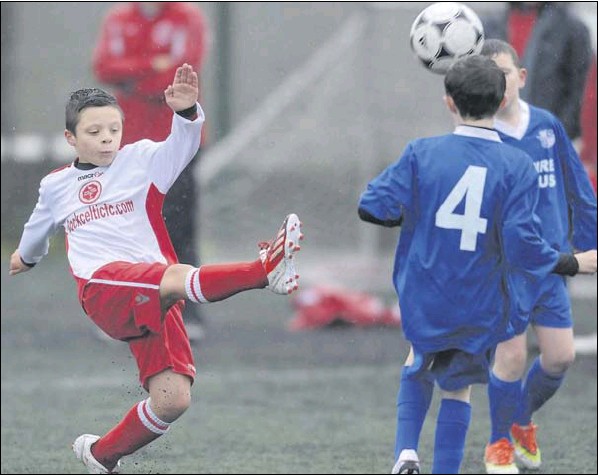 ROCK Celtic kept their title charge on track with a comfortable home win over Muirhevnamor last Saturday at a wet and windy Sandy Lane. Their latest victory means that they have a five-point lead over Glenmuir United at the top of the table and are still unbeaten in the league this season. Despite the relatively comfortable nature of the win it was the away side who created the first chance after only two minutes when Dylan McGuill wriggled free of his marker but couldn’t find the back of the net. The home side then dominated the next ten minutes and created numerous chances.

First to try his luck was Josh Hanna but he couldn’t keep his shot on target. Fiachra O’Hanlon was the next Rock player to threaten the Muirhevnamor goal but his dipping volley cleared the crossbar. It was O’Hanlon again who went close minutes later but once again his effort lacked accuracy. Despite the home side pilling on the pressure the visitors looked dangerous on the break and the pace of McGuill almost caught the Rock defence out but his effort was saved. The opening goal came midway through the half following another mini period of pressure from the home side. A freekick from the right side of the pitch was wiped in and Mark Leavy somehow managed to twist his body and volley the ball into the roof of the net despite facing away from the target.

It was stunning piece of skill and really lifted the collective tails of the home team.

The second goal arrived only three minutes later and owed more to luck or bad luck; depending on what team you played for.

A long hopeful ball seemed to be bouncing comfortably into the arms of the Muirhevnamor ‘ keeper but the wet ball squirmed from his grasp and to the feet of Dara Quinn who rolled the ball into the net to make it 2-0.

The second half followed much the same path as the first with the home side on top and the away side looking dangerous on the break.

It was the away team that almost grabbed the first goal of the half when Sean Cassidy tired an audacious lob that hit the top of the crossbar and trickled wide.

Much like the first half the home side took control of the game following a scare and almost made it 3-0 when Quinn got on the end of a nice passing move but his shot whistled over the target.

Rock did get their third goal of the game with ten minutes remaining when Evan McEnteggart broke free and calmly finished to seal another three points for the league leaders.

ROCK Celtic picked up where they left off before the Christmas break by taking all three points at home.

They didn’t have it all their own way though as a determined Muirhevnamor side pushed them to the wire in this entertaining game last Sunday in Sandy Lane.

Despite the cool winter sun that lit up the artificial pitch – the only pitch that had survived the heavy weekend rain come Sunday – it took some time for the actual game to heat up.

For the opening ten minutes it was left to the Rock’s Mark Leavy to wage a one-man battle to open the scoring but his powerful shots were well saved by the Muirhevnamor ‘ keeper.

That was really as good as it got until the final seven minutes of the first half when Evan Durnin reacted quickest to smash home the rebound following a good save by Ayo Lawal to give the home side the lead.

The second half was a more open affair as both teams created good goal scoring opportunities.

The away side were quickest out of the blocks and called Niall Brennan in the Rock goal into action with only seconds gone in the half as he got down smartly to save a James O’Connor effort.

It was then the turn of Ryan Coleman to have a pop at goal but his dangerous looking effort was blocked.

Despite being on the back foot for the opening ten minutes of the half it was Rock Celtic who doubled their lead in spectacular fashion. A low cross from the right side of the pitch evaded everyone until it landed at the feet of Durnin who made perfect contact with the bouncing ball and it whistled into the back of the net before the Muirhevnamor ‘keeper could even move.

It was cruel on the away side but they showed tremendous fighting spirit to pull a goal back almost immediately. The lively Ryan Coleman did well to find Sarah Jane Reid in space inside the box and she made no mistake, drilling the ball into the top corner, to give her side renewed hope for the rest of the match.

With only eight minutes remaining the away side almost got on level terms after Coleman turned smartly on the edge of the box but his goal bound shot was tipped around the post.

That was as good as it got for the away side and Rock Celtic held on to claim the win that sees them stretch their lead at the top of the table.

On a miserable  winters morning in Ardee Rock get off to a flying start with a 6 0 trouncing of their hosts. Rock held their shape with Callan deputising for lynch in the Center of defence with great support from Reilly  and Connor. The first goal came from a well won free kick as Monaghan was fouled as he broke through the Ardee defence. Up steped Fabiano and rifled the ball in to the back of the net.  Goal 2 comes from a well worked move between Monaghan and Hobin with Monaghan slotting the ball into the back of the net.Fabiano can take credit for Goal 3 as the Ardee man headed the ball into his own net from the corner kick. Goal 4 was sweetly taken by Hobin as he flicked the ball into the Ardee goal. Connor took goal 5 as he struck a long range shot past from outside the box  into the corner of the net leaving the Ardee keeper flat footed. Connor was then at the center of goal 6 as he won the ball on the right flank, broke down the wing passed it to Mcgrory who knocked it across the box for Monaghan to knock it into the back of the net. Also good for Rock where Smith in goals and Rogers in Midfield. Man of the Match Sean Connor.