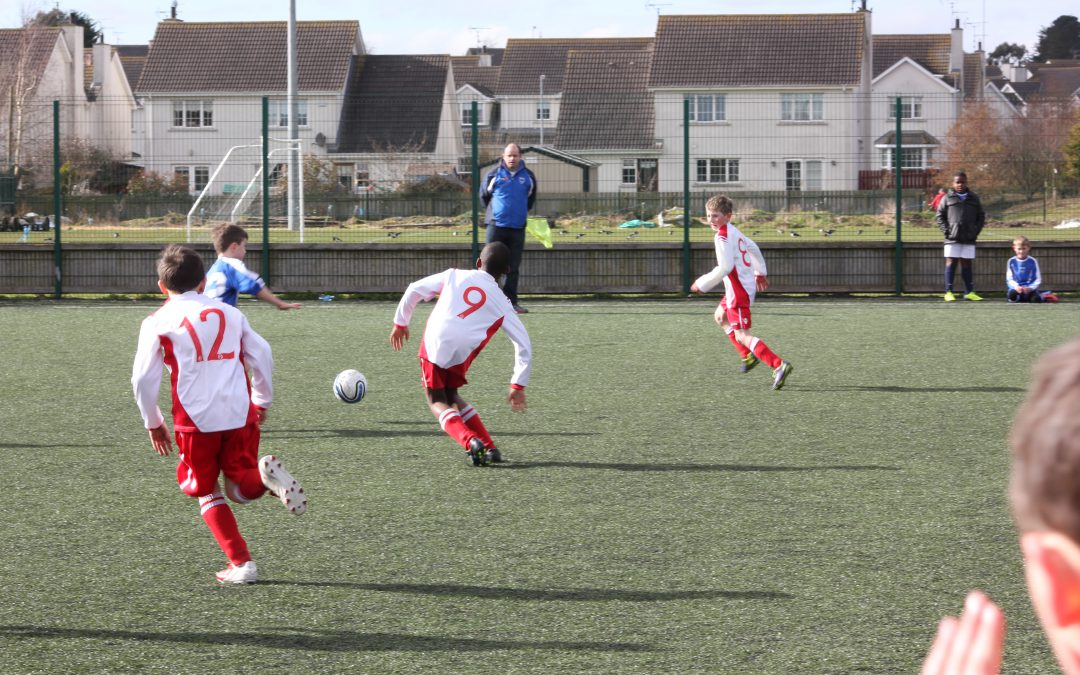 The Rock got off to a nervous start going a goal down after 10 minutes. Sebastian McGeogh brought the sides level with a wonderful strike bringing the sides level at the break. The second half saw Cian Sheridan come into his own with two great strikes to bring the Rock back in control. It wasn’t long before the Rock scored their forth goal through some excellent work from Mark Leavy who put Evan McEnteggert in for his first of the day and the team finished the game 4-1 winners.

The Rock got off to a slow start in sandy lane this morning going a goal down to Rangers after just 10 minutes. The rock got back level just before the break after the Rangers keeper spilled a shot from Evan McEntaggart which was finished off by Cillian Halpenny putting the sides level at half time. The Rock changed things around second half and if it wasn’t for some excellent saves from the rangers keeper, who kept Rangers in the Game. Then came a period where the Rock completely dominated the match and Evan McEntaggart scored 4 goals putting the rock in complete control. A goal late on from Ryan Dorrian left the result at 6-1.

The FASTFIX U11 premier served up a cracking game of schoolboy football at the weekend involving league leaders Rock Celtic and second placed Glenmuir.

The Seasiders who have been on a great run this season were on top right from the start, going a goal up within the first few minutes.  Josh Hanna set the tone in midfield and he tested the Glenmuir keeper with a ferociously struck shot from distance which could only be deflected into the path of Rock’s Mark Leavy who showed a great touch before adding another goal to his collection this season. The home side then dominated proceedings for a decent spell playing some great passing football in particular with the midfield trio of Hanna, Dara Quinn and Fiachra O’Hanlon creating a host of scoring chances for the forwards. Just when it seemed Rock would add a second goal Glenmuir hit back with a surprise equaliser. A well taken corner kick from Barry Kehoe caused a mix up in the Rock defence and Emmanuel Adeboyega was the quickest to react forcing the ball over the line. It was a real confidence booster for Glenmuir and they piled on the pressure on Rock after that forcing a number of further corners. Glenmuir’s danger man Jesse Nwabueze went closest to adding a second for Glenmuir when his well struck shot hit the woodwork just before half time.

The half time interval allowed Rock to regroup and make some changes. Senan Carroll and Steve Kamtchou were introduced up front for Rock and they made an immediate impact linking up well with the midfield and causing problems for the Glenmuir defence. Apart from a few scoring opportunities involving Glenmuir’s Nwabueze and Adeboyega, the Rock side had the lions shares of goal scoring chances in the second half, playing some wonderful football at times and showing why they have been the team to beat all season. Midway through the second half Rock were awarded a free kick in a very dangerous position after Steve Kamtchou was fouled on route to goal. Josh Hanna stepped up to take it and showed great composure hitting a really wonderful strike that gave the keeper no chance. It was a deserved lead for Rock and they remained on the front foot after that, with Quinn, O’Hanlon and Carroll all going very close to adding a third goal. It was another very solid performance from the Rock defence of Jack Donoghue (in goals), Eoin Byrne, Cillian Duffy and Layo Adebanjo. The win moves Rock Celtic eight points ahead of Glenmuir in the league.