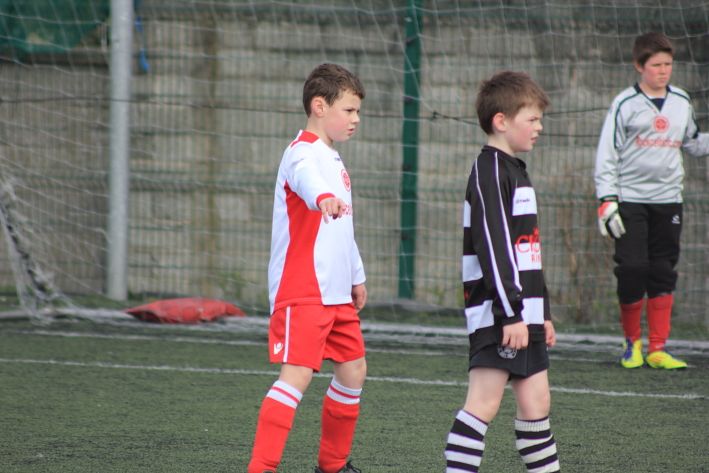 Rock Ville hosted Bellurgan on a bright Sunday morning with a spring in their step following their hard fought away win at Glenmuir a mere six days previously. The last time the sides met, sloppy defending saw the away side surrender a winning position to finish the match sharing the spoils with their hosts. Rock seemed determined not to make the same mistake twice and must have been heartened to line up against a depleted Bellurgan side down to the bare bones. Rock, meanwhile, were almost at full strength and fielded an adventurous lineup with James McNamara in goal and Oisin McCooey slotting in at Right Back from his more usual berth in midfield. Captain Conor Casey and Liam Cafferty the ever present rocks in central defense were assisted by Jack Bellew at Left Back. In midfield Peter Woulfe and Thomas Jackson were flanked by Isaac McGahon on the right and Seanie Maguire on the left. Oisin Cleary plyed his craft in the link role between Midfield and attack and Declan Curtin started up front.

The side from Cooley started bravely but were soon overpowered by the home side who pressed their numerical advantage. Peter and Thomas were tenacious, winning and distributing the ball, feeding up to Oisin whose clever passing opened up opportunities for the home side, or spreading play to the wings where Seanie’s trickery and Isaac’s direct running proved difficult for the away side to handle.

It didn’t take too long for the deadlock to be broken and within minutes Bellurgan found themselves behind from Oisin Cleary’s unerring strike. Rock’s advantage was soon doubled when Declan found the net with a clever dink. Bellurgan were under siege for the rest of the first half and Declan and Oisin both doubled their tallies to leave the home side going into the break four goals to the good.

With pride to defend the away side started the second half in a more resolute fashion and Rock were forced to defend. Niall O’Reilly came on at Left Back and sought to snuff out any danger on Bellurgan’s right flank but also emulated his colleague Oisin on the right in bringing the ball out and helping to build attacks. Peter strode through midfield imperiously assisted by Thomas’ tigerish tackling and Sean’s clever movement and quick footwork. Isaac found himself one on one with the keeper on a couple of occasions but couldn’t put his chances away. At the other end Conor and Liam mopped up everything Bellurgan could throw at the home side and showed composure in releasing the ball to midfield every chance they could get. Nonetheless there were a few scares but the home side held firm. Oisin Cleary came off to be replaced by his namesake Oisin McDermott who proved able to slot into a midfield and attack as well as his usual place at full back as the formation changed. Declan kept pressing as ever and was rewarded with his effort by completing his hat trick with a thundering strike. James Carron came on in defense to help Rock keep their advantage. James McNamara in goal proved impassible in goal and when he came out to play in midfield proved just as adept at holding onto the ball. Oisin McCooey took over as custodian and helped make sure that Rock retained a clean sheet.

The final whistle saw Rock record their biggest win of the season with their third win in four games, their only regret being that they will have to wait until next season for their next league game.

First and second half goals from Evan McEntaggert and Steve Kamtchou respectively were enough for the home side to collect maximum points in this important League game. The first goal came after some great work by Fichra O’Hanlon down the right wing beating 2 Quay defenders before firing in a dangerous low ball across the peanlty box which Evan managed to direct past the Quay goalkeeper. Josh Hanna was the creator of Rock’s all important second goal when he dispossessed the Quay forward near the corner flag and ran close to the halfway line before splitting the Quay defence with a clinical 30 yard pass into the path of Steve Kamtchou who managed to steer the ball in off the Quay keeper. Rock had a number of close chances to add to their lead through Mark Leavy and Fiachra O’Hanlon in particular who put in his best performance of the season in the first half. Cillian Duffy, Jamie Callan and Eoin Byrne had excellant games in defence and ensured that Jack D in goals had a relatively quiet game. A great all round performance by the lads with some excellant skils on display – [Check out the Video highlights]