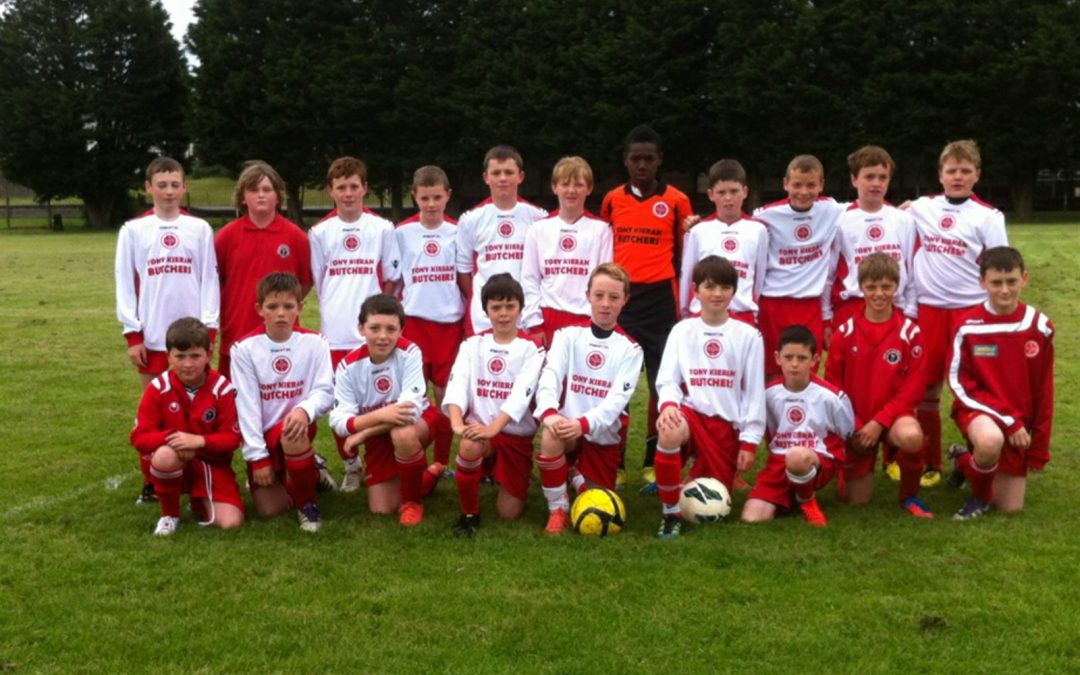 Another great squad performance with all 21 players contributing to victory. A hatrick from ever approving Oisin geogaghan was the foundation for the win. A brace from oisin murtagh plus goals from Oisin Meegan, Alex mc Carthy, Jonathan Kierans, and a great headed goal from Dara Farrelly wrapped up the victory.

The match was kindly sponsered by Dr Larry Curtin

The U14s made it 2 out of 2 on Sunday with an away win to New Generation. While the match finished 2-1 the Rock should have been home and dry early on in this match after creating many chances with the opposition goalie pulling off save after save.

The Rock opened the scoring 15 minutes into the first half with a well taken strike by Ciaran Fee after being set up by good play from Feidhelm Joyce. The Rock then created a number of chances hitting the post twice but could not add to their lead. The home side got an equaliser when breaking from the back to catch the Rock defense on the hop leaving the score level at half time. The match was very tense with the score line staying the same until the last 5 minutes of the game when centre half Jack Reid pushed up and let a screamer rip from his boot which gave the keeper no chance.

The U11\’s played Quay Celtic at Clancy Park on Saturday morning. The game began with the Rock Defence staying solid and absorbing most of the pressure from Quay. Shane Mullen provided some great cover at the back and a man of match performance from Mark Durkin in goals made it diffiuclt for Quay to convert their chances on goal. With 5 minutes to half time it was Rock who opened the scoring in this hard fought contest – a super solo run by Josh Hanna who picked up the ball in his own half, beat 2 Quay players and let rip a thunderbolt of a shot which found the back of the net to leave the score 1-0 to Rock at half time. Quay came out fighting in the second half and within minutes it was all square at 1-1. Donal Leavy moved into a midfield role to close down the Quay attacks. Quay began to dominate the game however and it wasnt long before they were leading 2-1. This determined Rock team picked themselves up and had Quay on the backfoot for spells of the second half. Some great work by Cillian Duffy and Sean Maguire on the right wing almost led to an equaliser. With time slipping away Quay put a high ball into the Rock defence – a goal mouth scramble resulted with Quay finally heading the ball over the line to take all three points with a 3-1 win. Despite the scoreline the Rock team played very well and look forward to the return fixture at Sandy Lane later in the season.

The U10s had a busy weekend playing 5 matches at the Lee Myles Tournament on Saturday afternoon followed by a league game against Glenmuir on Sunday morning. Rock Celtic followed up their great Cup win on Saturday with a fine performance against Glenmuir. Despite being permanetly camped in Glenmuirs half of the pitch for large parts of the game, the lads just coudnt get the winning goal their performance so richly deserved and had to settle for a share of the points. Mark Gallagher scored Rocks only goal (and his first for the team) after a great run by Mark Leavy. Rock played some lovely football at times as evidenced by the brief highlights video posted in the Video Section (compliments of Lisa Hanna).

On a bright sunny “All Ireland” day off to Monaghan we went for a game of soccer in the SBDL. We were well received in the impressive Glaslough grounds. The game kicked off at 10:30 sharp and Rock got off to a quick start with great midfield play by Frank McGrory & Sean Connor combining well with nice passing to set up Evan Durnin with his 1st of the day. Rock took their foot off the gas and Glaslough took advantage by pressing hard resulting in a well deserved equaliser. Rock were stunned and could not pull it together and gave away another goal on the stroke of half time with the 1st half ending 2-1 to Glaslough.

The 2nd half commenced with Rock starting strong. Dara O’Hare, James Reilly & Kalem Rodgers defended well with some excellent tackling from Reilly & Rodgers on both wings. After 10 minutes into the 2nd half Rock levelled after Frank McGrory picked the ball up in defence and went on a surging run from one end of the pitch to the other crossing the ball low for Evan to get his 2nd of the day. Rock were now demanding the game off Glaslough taking full control of the midfield through Jack Mulvihill, Sean Connor, Alex Gough, Frank McGrory & Dara O’Grady with some fabulous surging runs. Rock took the lead with some very clever play from O’Grady & McGrory linking up for a short corner with McGrory shooting low to beat the keeper at the near post. Again Glaslough pressed and Brian “Caffo” Cafferty kept Rock in the game with some outstanding goal keeping. Glaslough equalised with a blatant offside goal showing the referee to be unaware of the offside rule. The score now stood at 3-3 and the final whistle blew. (The referee said afterwards he never knew the offside rule existed in U10 games!). Good for Rock were James Reilly, Brian Cafferty & Dara O’Grady. Man of the Match was Frank McGrory