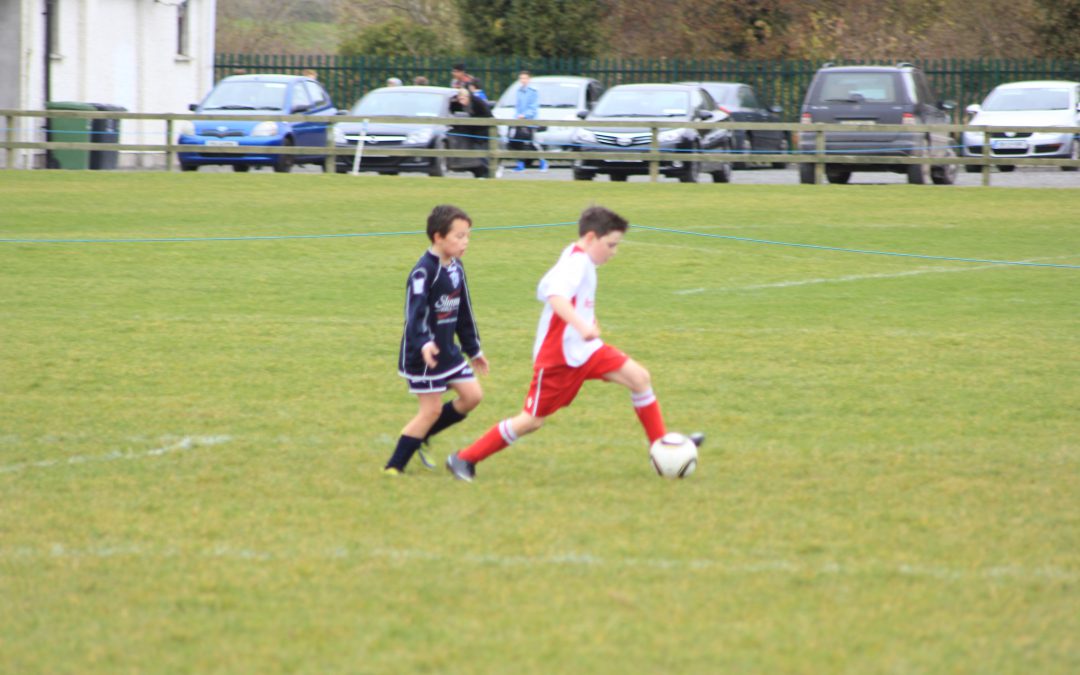 Rock U10’s played out a tough scoreless draw away to Ardee on Sunday morning. The top two sides in the U10 premier both had chances in the game but a draw was a fair result. Best for Rock on the day were Darragh O’Gradaigh and Sean Gartlan in defence, Mark Leavy and Cian Sheridan in midfield and Evan McEnteggert up front.

Rock’s unbeaten run stretched to four games after Wednesday night’s game in Sandy Lane. Fresh on the back of a very impressive draw against league leaders Donacarney on Sunday the seasiders showed a lethal touch to kill off Albion Rangers.

In blustery conditions it was Rock who started on the front foot when a Jack Reid free-kick was touched onto the bar by the Albion goalkeeper. Then it was James Corrigan’s turn to try his luck from distance with a low shot that went narrowly wide of the far post. Jack Reid headed over a Patrick O’Callaghan corner as the Rock onslaught continued. On the 25 minute mark Rock took the lead when the instrumental James Corrigan picked up the ball in midfield and drove at the Albion back line and fired a shot under the keeper to make it 1-0 to the home side. As the half drew to a close it the match went in evenly poised at 1-0.

As the second half started Rock showed their intent on killing the game off. With Andy Lynch, James Corrigan and Patrick O’Callaghan went close but couldn’t find that killer goal. In the 45th minute Corrigan picked up the ball in midfield and played a ball over the top of the Albion back four where Patrick O’Callaghan latched onto the through ball to finish into the corner of the net. Two nil soon became three when substitute Chris O’Neil found space in the box and his cross come shot somehow ended up in the back of the net.

You would think that the constant pressure would result in more goals for the home side but that was not the case. When Andy Lynch lost the ball cheaply the Albion midfielder played a lofted ball over the top the Albion no.9 calmly slotted the ball past the reach of Alan Smyth. This was a setback for the home side but they showed the character of a team that’s going through a purple patch. Within five minutes of the Albion goal Rock had well in truly killed the game off. Firstly it was substitute Chris O’Neil who found room in the box who sent in a brilliant cross for Feilham Joyce who calmly passed the ball into the back of the net. This wasn’t it and almost straight from tip Rock won the ball and played nice football down the left with Niall Campbell and Peter Farrelly both involved with Niall who picked out Patrick O’Callaghan who made no mistake from the edge of the box. Another good win for the Rock side that  travel for the reverse of this fixture on Sunday morning.

It was another away win, and another clean sheet from the Rock lads, but they had to battle hard against a very physical Quay Celtic on their travels to the Coes Road pitch on Saturday morning. The Rock lads were encamped in the Quay half of the pitch for long periods of the first half winning at least half a dozen corners in quick sucession and with Quay conceding a similar number of free kicks as they struggled with the pace and skill of this Rock team. One of those corners swung in by Dara Quinn caused confusion in the Quay defence with one of their players bizarely catching the ball and concending a penalty. Josh Hanna stepped up and hit a well struck shot however the Quay keeper pulled off a great save. Josh then went very close with a great free kick effort. With minutes remaining in the half some great play by Rock led to that all important first goal. Winning the ball in defence Rock played in striker Senan Carrol who with his back to goal set the ball to Mark Leavy on the right side of midfideld. A beautiful lobbed pass from Mark caught the Quay defence completely off guard with Evan McEnteggert finding the time to take the ball down, round the keeper and slide the ball over the line. It was no more than the away side deserved. The second half was more evenly matched with Quay’s best chance coming from an excellant free kick effort however Jack Donohoe was equal to the task showing great composure and handling. Rock’s Shane Sharkey and Layo Adebanjo made some great incerceptions to snuff out any possible danger as Quay pressed for the equaliser. Rock had no intention of just trying to hold on to their slender one goal lead however and continued to push on for a second goal with some great passing combinations down the left flank in particular. They showed great composure particularly in the last 3 or 4 minutes keeping possession of the ball as Quay continued to press. At the final whistle the score remained 0-1 win taking Rock 2 points clear at the top of the FASTFIX U11 premier. TEAM: JACK DONOHOE, EOIN BYRNE, ALEX GOUGH, SHANE SHARKEY, LAYO ADEBANJO, DARA QUINN, MARK LEAVY, JOSH HANNA, SENAN CARROLL, GAVIN GILMORE, EVAN MCENTEGGERT

Rock came into the back of this game on Sunday morning having thrashed their opponents only 4 days earlier 5-1 in Sandy Lane. So they made the trip to Monasterboice knowing that they should take maximum points from the game.The game started, and it was Rock who were on the front foot from the off with Andy Lynch, James Corrigan and Patrick O’Callaghan all going close. It took twenty minutes for the seasiders to take the lead with good build up play in midfield involving Chris O’Neil and James Corrigan who played a ball to Patrick O’Callaghan who spun his marker lovely and finished into the corner of the net. This was the strikers 7th goal in 8 games for his new club this season. On the 25th minute mark it was 20, with Paul McArdle playing a ball into Andy Lynch who struck the ball off the defender the ball was then recycled and it fell invitingly for Lynch who made no mistake with his left foot tucking the ball into the corner of the net. 2-0 soon became three when the two front men linked up with Andy Lynch providing a perfect cross for Patrick O’Callaghan who calmly slotted the ball into the net for his 8th goal in 8 games. Rock’s reason form of late has been down to the front two who have 15 goals between them in 8 games. The second half started the same way as the first half did with Rock continuing to dominate their opponents. Alex Cleary, Niall Campbell, Chris O’Neil, Andy Lynch and Patrick O’Callaghan all involved with good chances for the young Rock team. The fourth goal finally came 10 minutes from time when super sub Ciaran Fee slotted in from a Peter Farrelly cross. Another good performance for the Rock side who have taken 13 points from the last 15 available.