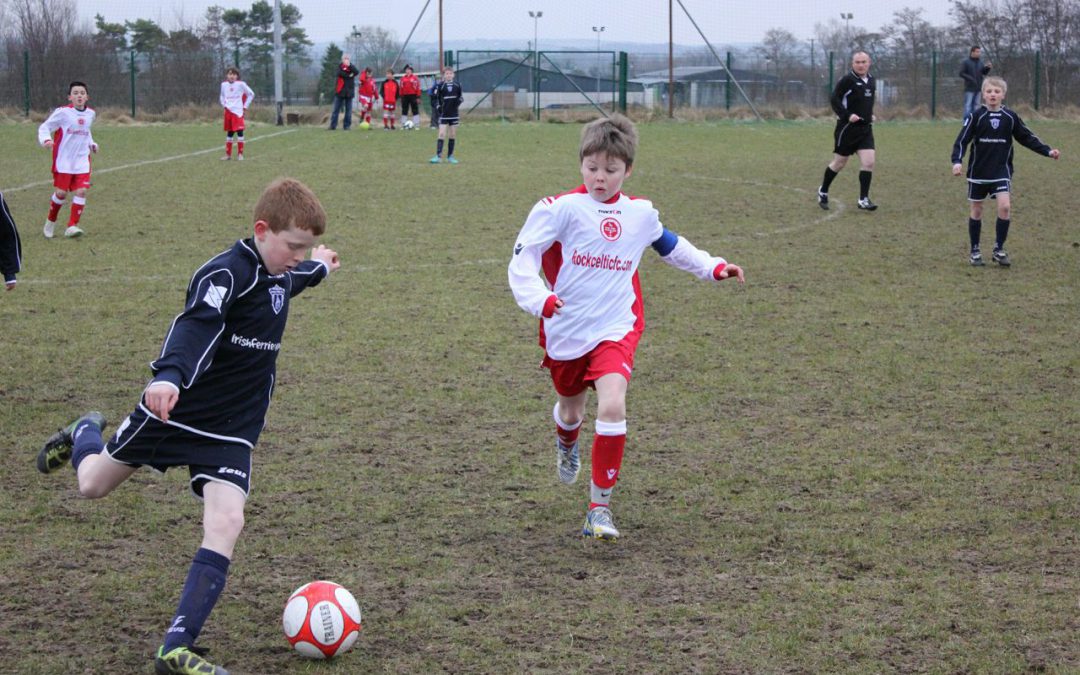 A brisk Easter Sunday morning saw Rock Ville U12s register their second win of the season with a hard fought victory over Muirhevnamor at Sandy Lane. It was a focussed Rock team which took to the pitch, no doubt cognisant of the last time these teams met. Back then the team in blue somehow contrived to overturn a two goal deficit to Rock at half time and ran out 4-2 winners courtesy of two late and controversial goals. The manner of that defeat still rankled and the Seasiders seemed determined not to allow history to repeat itself. Rock attacked from the start with Oisin McCooey and Isaac McGahon in the centre of midfield feeding out to wingers Declan Curtin and Seanie Maguire, Thomas Jackson playing in the hole and Oisin Cleary battling up front. Muirhevnamor seemed found it difficult to get a hold of the ball. Rock pressed their advantage and sure enough Thomas found himself bearing down on goal before composing himself to slot an unstoppable ball past the Muirhevnamor custodian to take the lead for the home side.

As is often the case Rock’s most potent source of menace was down the left wing. Grateful no doubt for the platform offered by Luke Seckerson’s tenacious defending Declan tormented the Muirhevnamor right side drawing additional players over every time he had the ball and opening up space for the home midfield. Captain Conor Casey was as ever imperious in central defense and it was the combination of both players that led to the next chance. Conor first clearing the ball and then Declan lofting it into space while Seanie drifted in from the right wing to find himself one on one with the keeper, rifling past the keeper to double the lead before wheeling away in celebration. It was only after this second goal that the away side began to regain a foothold in the game and Rock would have some defending to do. Eamon Daly at right back was unflappable and never panicked. Conor’s partner in central defense Liam Cafferty swept up everything that came his way while Bryan Soraghan proved impassible in goal tipping away a Muirhevnamor strike to keep a clean sheet going into the break.

In the second half Oisin McDermott and Niall O’Reilly came on to help out in defense and to give a break to some of their tired colleagues. The home team was naturally inclined to protect their lead and this perhaps stifled some of their attacking intent. Muirhevnamor pressed and pressed before finally pulling a goal back. There was more than a hint of offside in the Muirhevnamor forward’s position but the referee was unmoved, the goal stood and Rock were forced to defend a slender one goal advantage. There were chances at each end as Rock attempted to use the width of the pitch with Declan on the left and Isaac, having swapped places with Seanie, on the right and keep Muirhevnamor pegged in but the away side proved adept at counterattacking, winning a series of corners. Rock were focused and determined however and repelled everything that was thrown at them. Thomas came back into midfield alongside Oisin McCooey and Seanie and all three battled to win and keep the ball. Oisin Cleary, having put in a tireless shift up front, playing as a lone striker for much of the match and still finding his way back after injury, came off for a much needed rest while James Carron came on to keep the Muirhevnamor defenders occupied. Rock worked hard to hang on and close out the game and there was a palpable sense of relief but also jubilation at the final whistle.