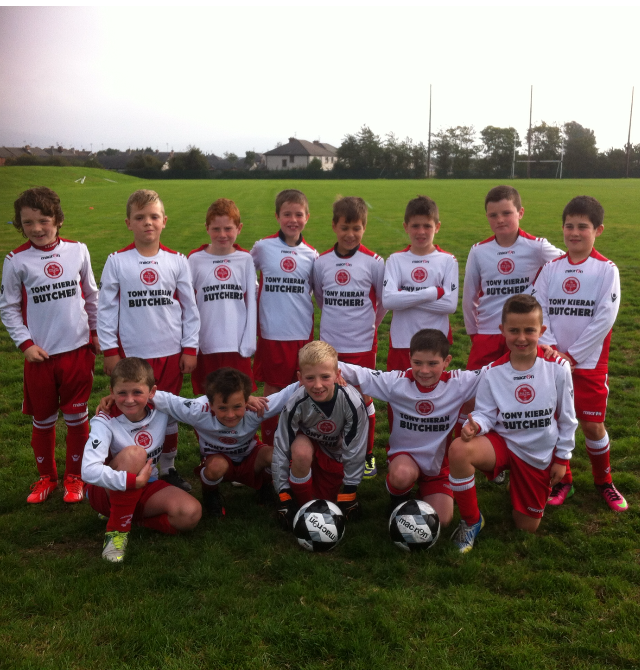 Rock Celtic U10’s put in another impressive performance in Bellurgan to continue their unbeaten run and stay on top of the table. Evan McEnteggert was on target first with a great strike to put the Rock lads a goal up after only 10 minutes. Bellurgan then pulled one back after an error at the back for the Rock.

The away side pressed hard and went deservedly back in front after some good work from Cian Sheridan on the right wing to put Mark Leavy through on goal just before the half time interval. Rock had a number of further chances but the Bellurgan defence held firm. Despite all the pressure Rock couldn’t extend their lead and the game finished 1-2. Another great 3 points for the league leaders.

ROCKVILLE closed to within two points of fifth place Redeemer after a convincing win over an under strength Setanta in Bellew Park. Despite the lopsided look of the final score the first half was extremely competitive as both sides created a host of chances. It was the away side that had the first few chances of the game as Oisin Hughes went close as he forced the Setanta ‘keeper into two smart saves. Setanta hit back with a good effort of their own but a Dion Closnegssy shot drifted wide of goal. Both sides then traded good chances as any idea of defending was put on hold as they went looking for goals. It was a dangerous game to play and it was the increasingly busy Setanta rearguard that cracked first as Senan Duffy left foot strike opened the scoring five minutes before the break. Things got worse for Setanta on the stroke of halftime when Paddy Craven fired the ball into the back of the net to make it 2-0. The home side responded strongly at the start of the second half and were back in the game after only two minutes when the ball fell to Rebecca Lambe Fagan just inside the box and she smashed the ball home to make it 2-1. That was as good as it got for Setanta and Rockville made use of their superior speed throughout the team to pull away from their opponents.

The impressive Jack Connolly helped himself to a second half hat-trick with the first coming just three minutes after Setanta had scored. The equally impressive Ryan Greene used his pace to outrun the Setanta defence before rounding the ‘keeper and sliding the ball into an empty net. With the result secured there was further goals from Jack Connolly and a smart volleyed finish from Killian Mullen just before the end of the match.