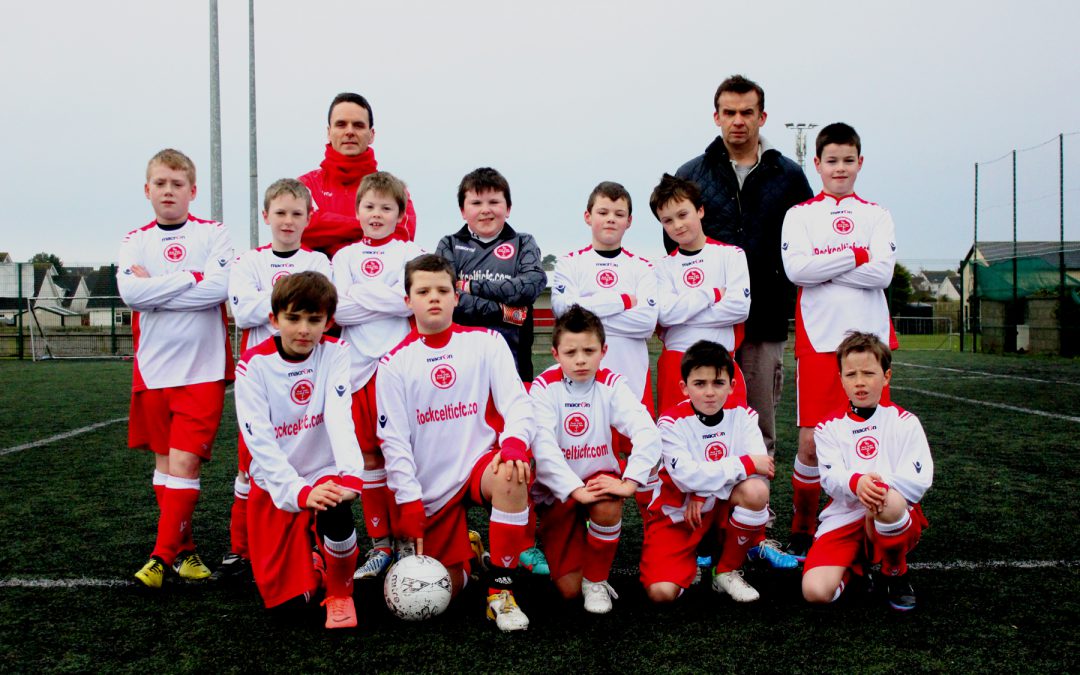 [Check out Video Section for best bits from the game]

League Leaders New Generation suffered their first defeat of the season away to an ever improving Rock Celtic side at the weekend. On a beautiful morning in Blackrock the conditions were perfect for football with both sides really up for this game – New Generation looking to extend their lead at the top of the table and with the Seasider’s needing maximum points to stay in the title race. With 5 wins and a draw under their belt since January the Rock have been on a great run. Nevertheless the away side will be disappointed not to have earned at least a point in a very entertaining game with some exciting young players from both teams on display.

New Generation dominated proceedings throughout the first half and went 1-0 up after only 5 minutes. A long ball caught the Rock defenders off guard and while Keeper Jack Donohoe managed to divert the ball away from Jesse Nwabueze bearing down on goal he could do nothing about the follow up shot from Ebuka Kwelele. Minutes later New Generation rattled the Rock cross bar with a great long range effort. The first half saw some good exchanges involving Declan Curtain and Josh Hanna however their only real goal scoring opportunity came when Rock’s Edward Otesanya’s goal bound shot was deflected wide. New Generation continued to pile on the pressure and Rock had to rely on a wonderful save from Donohoe and some good defensive work by Adam Gartlan to stay just the goal behind at the half time interval.

The Rock coaches responded by reshuffling their deck of players with Donal Leavy and Josh Hanna resuming their midfield partnership alongside Declan Curtain and Conall McCaul dropping back to central defence alongside substitute Conor Casey. The impact was immediate with Rock’s midfield trio combining well right from the kick off with some nice football. Not to be outdone New Generation’s Nwabueze then caused mayhem for the Rock defence with a great individual run and was very unfortunate to see his shot hit the post and rebound into the arms of Rock’s second half keeper Nial McQuillan. Moments later a well struck shot from Kwelele also rattled the Rock post. The Rock lads then turned the tables with some great play at times. Their first goal came midway through the second half when Hanna split the New Generation defence with an exquisite pass into the path of Declan Curtain whose first time strike gave the keeper no chance. Shortly afterwards central defender Conall McCaul used his height well to head home a well delivered corner from Curtain to put the Rock 2-1 up. New Generation had a number of chances to draw level with some great runs from Kwelele and Nwabeze in particular and a header just over the bar. Rock’s third goal came through the grit and determination of Donal Leavy winning a 50:50 ball in midfield, he went on a powerful run before passing out wide. A well delivered cross from Curtain into the danger area was met by Otesanya who calmly slotted the ball into the back of the New Generation net. Best for Rock were Leavy, Curtain, Hanna and McCaul.

This was one match that the Rock really pull out of the fire and kept the momentum going after also defeating Quay away too.

So in the last two matches Rock have taken the scalps of 2nd and 3rd place with another important match again away to the leaders Glenmuir next Sunday.

The match was played in very cold windy conditions on Sunday morning and it took the Rock awhile to get going or warm up even if there was some personal missing.

As the following cliché is often use this was a game of two halves were the Rock did not make any impression conceding 3 goals to elementary mistakes in the 1st half.

There was no competing for the ball, no tackling and our passing game was very poor however young Liam O’Callaghan was the only player really trying to make a effort.

After a stiff talking to during half time the Rock came out with a different attitude and were competing for every ball, their passing game improve but could not make

chances in the last quarter of the pitch.  The management decided to make some changes and push Jack Reid into midfield and Feidhelm Joyce into full forward.

With this the Rock were really starting to make headway into Bellurgan’s half, they got their reward when Aidan Curtin converted a free kick from 30 yards out.

The Rock were really pushing forward and causing problems for the Bellurgan defence and won a few corners.  With this pressure Bellurgan conceded a penalty when after Jack Reid got

on the end of a corner and the ball goal bound only for a defender to handle the ball.

Jack Reid took the penalty, initially missing it after a good save from the keeper but score from the rebound to make it a score line of 3-2.

Rock were really turning the screw here and got another goal when the ball was force over the line from a corner, this was hard to say who got the last touch.

Now with the last couple of seconds ticking away the Rock went for the win, with some great work up the left wing with Oisin Meegan and Liam O’Callaghan.  Jack Reid was

play through by Oisin Meegan who let a rocket of shot fly from the edge of the box and grab the winner for the Rock.

In this match there was some fine performance in the 2nd half from Ben Mooney who is really becoming a force at center half, Feidhelm Joyce, Aidan Curtin, Oisin Meegan when he came on but special mentions for Jack Reid and Liam O’Callaghan.