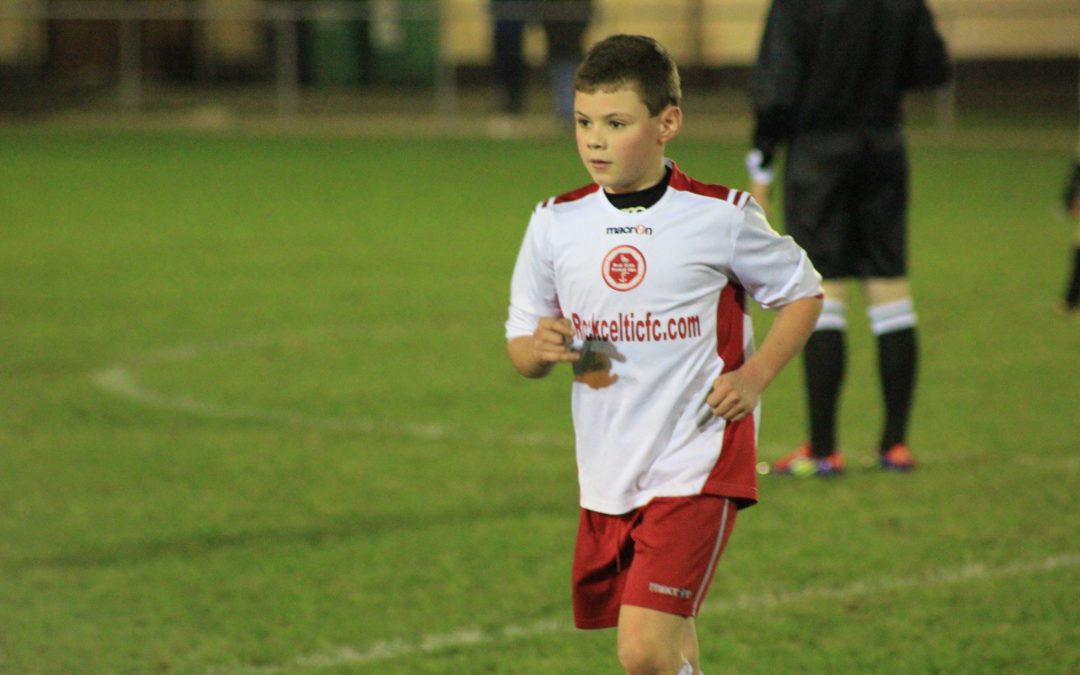 Rock Celtic U10 played out a 0-0 draw in Bellurgan the morning. Both sides had chances with Evan McEnteggert going closest for the Rock in the first half. The second half saw more of the same with neither side able to get a goal. It leaves the Seasiders still with their unbeaten record and still top of the league. Well done again lads!

The U11 Premier League leaders Rock Celtic maintained their hot goal scoring streak away to Rangers on Tuesday evening with another impressive 0-6 win.

Dara Quinn was the scorer of Rock’s first goal midway through the first half. After receiving a fine pass from Evan McEnteggert out on the left wing Quinn placed his shot safely past the Ranger’s ‘keeper. The team’s top scorer so far this season McEnteggert then got himself on the score sheet with a cracking left foot shot into the top corner.

Things started to look ominous for Rangers from that point on as the Rock team played some exceptional football in the overly “spacious” Bellew Park pitch. Rock keeper Jack Donohue played a key part in his team’s third goal. With the Rock defence pressed high into Rangers half, a long clearance from Rangers was met by Donohue now in sweeper mode and he played a perfect pass out wide to midfielder Fiachra O’Hanlon. After beating two Rangers players, O’Hanlon then played a great square ball into the path of Dara Quinn whose first time strike gave the keeper no chance. Josh Hanna was then desperately unlucky not to score what surely would have been goal of the season after he picked the ball up in his own half and dribbled and jinked past 6 Rangers players before forcing a great save from the keeper. The pace of Cillian Duffy, who was having a great game and striker Gavin Gilmore caused all sorts of problems for the Rangers defence throughout the first half. After a number of close efforts Gilmore finally got the goal he deserved after cutting inside from the right wing and coolly slotting his shot into the bottom corner.

Rangers managed to contain Rock for most of the second half however it was only a matter of time before they got their fifth goal and it was worth waiting for. Josh Hanna jinked around a few players in midfield before playing a perfectly weighted ball through the Rangers defence into the path of Mark Leavy, who hit a stunning strike with his first touch from outside the 18 yard box  and which smashed into the roof of the Rangers net. Shane Sharkey and Senan Carroll were then both unlucky not to get on the score sheet with close efforts. Fiachara O’Hanlon finally added Goal number six near the end of the game, a fine left footed chip over the Rangers keeper. The impressive Layo Adebanjo had another fine game for Rock at the heart of the defence. The win now extends Rock’s lead at the top of the U11 Premier to five points. Team: Jack Donohue, Alex Gough, Cillian Duffy, Shane Sharkey, Layo Adebanjo, Dara Quinn, Josh Hanna, Fiachra O’Hanlon, Mark Leavy, Senan Carroll, Evan Mcenteggart, Gavin Gilmor.

Rock Celtic’s incredible form hit overdrive at the weekend with a 0-8 away win against Bellurgan United. Gavin Gilmore, Evan Enteggert and Josh Hanna each grabbed a brace with Rock’s other goals coming from Fiachra O’Hanlon and Senan Carroll. The Seasiders will probably be disappointed that the first half of the season has now ended and will hope they can pick up where they left off when the League resumes in the middle of January.

After last week’s fantastic win against Ardee Utd, Rockville U10’s were hoping to keep their excellent start to the second half of the season going. They did that today with a fine 1-1 draw against a very good Redeemer team that beat them 5-0 in the first round of matches.

Leading goal scorer Eddie Territt got Rockville off to a great start with a lucky goal after 2 minutes. The rest of the first half was then end to end and Redeemer were rewarded with a fantastic goal from 20 yards that looped in over Adam Daly’s arms into the net.

Midway during the second half there was some controversy when Barra Duffy shot from distance, and the ball seemed to have crossed the line, only to be denied by the referee. Hawk Eye would surely have given the goal! Key to Rockville’s excellent performance today were the back three of James Woods, Jai Akhai and Conor Lynch, ably supported by the midfield of Barra Duffy, Eddie Territ, Zak Alderdice and Jack Daly. But this was a real team effort with great performances from all 11 players who played today. The team today also included Fionn Cunningham, Blake McConville and Rory McLoughlin