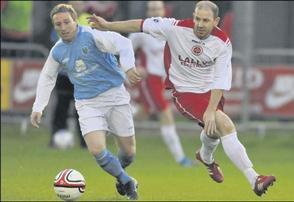 WOODVIEW Celtic well and truly lasid their Rock Celtic bogey to rest on Friday night as the champions got back to winning ways following the previous week’s first league defeat in nearly a year.

Last year’s league winners only managed their first ever win over Rock in the vital run-in to their second successive title back in the spring, but they repeated it to end Rock’s 100% start to the campaign.

Bolstered by the arrival of a number of key players, Woodview managed to protect the 2-1 lead they had eked out at halftime, with Rock unable to prise open the opposition defence. In fact, neither side created a clearcut opening as they cancelled each other out in the second half.

Rock brought on new signing Chris Lawless, the second FAI Senior Cup winner in their ranks, but he couldn’t provide the penetration that they were lacking.

Woodview took the lead after 10 minutes when Mickey O’Kane put in a fine cross that resulted in John Rogers saving a header from Owen Armstrong, only for the ballto fall to Alan Larkin who blasted it to the net from the penalty spot.

Rock equalised 10 minutes later. Woodview failed to clear the ball which broke to David Ward on the edge of the box and his powerful shot took a slight deflection off Cathal Bellew’s boot to deceive Padraig Gorham in the visitor’s goal.

Rock looked the better side at this stage, but Woodview struck for what turned out to be the decisive goal on 35 minutes when great link-up play between O’Kane and Paudie Hearty resulted in the latter rounding Rogers and slotting the ball to the net.